In just one week more than 500 people have signed a petition to introduce a Rainbow Crossing to Portishead High Street.

Rainbow Crossings have been popping up across the UK since 2015 in London, Leeds, York, as a way of using the public realm to promote inclusivity and celebrating an area’s LGBTQ communities. Regionally, proposals are already in place to introduce rainbow crossings in Swindon, Evercreech, and Gloucester. 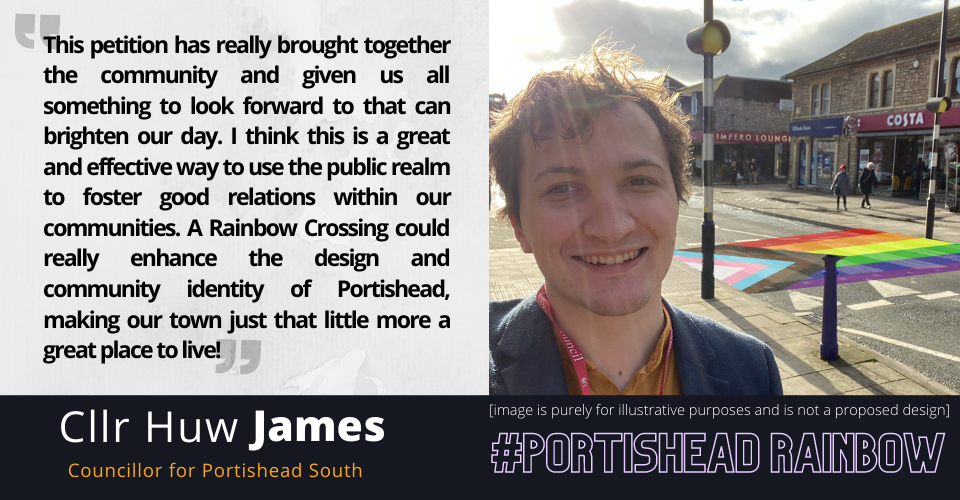 Cllr Huw James said: "I am amazed by the positive response and support from Portishead and surrounding areas for the principle of introducing a Rainbow Crossing to Portishead. This has been a hard time for many LGBTQ residents, particularly those living in difficult family environments, unable to get the community support they need. This petition has really brought together the community and given us all something to look forward to that can brighten our day. I think this is a great and effective way to use the public realm to foster good relations within our communities. A Rainbow Crossing could really enhance the design and community identity of Portishead, making our town just that little more a great place to live!" 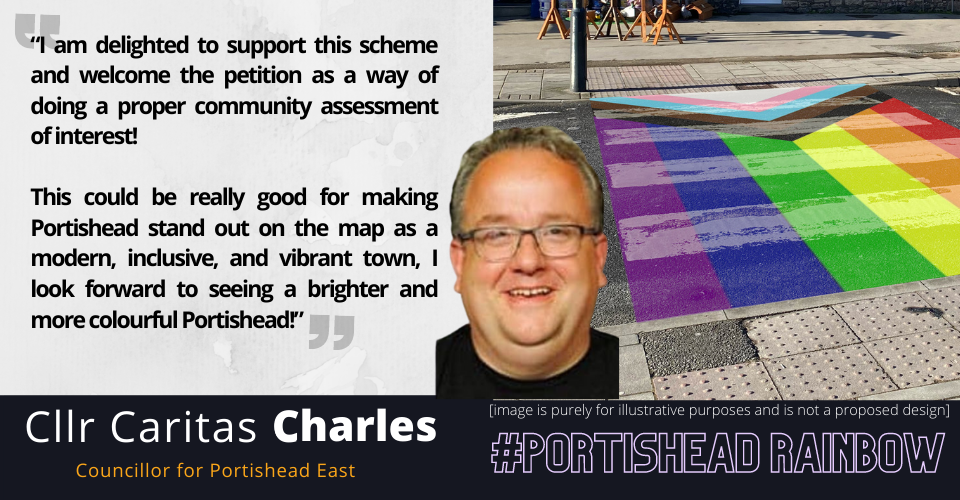 Cllr Caritas Charles said: “I am delighted to support this scheme and welcome the petition as a way of doing a proper community assessment of interest! This could be really good for making Portishead stand out on the map as a modern, inclusive, and vibrant town, I look forward to seeing a brighter and more colourful Portishead!” 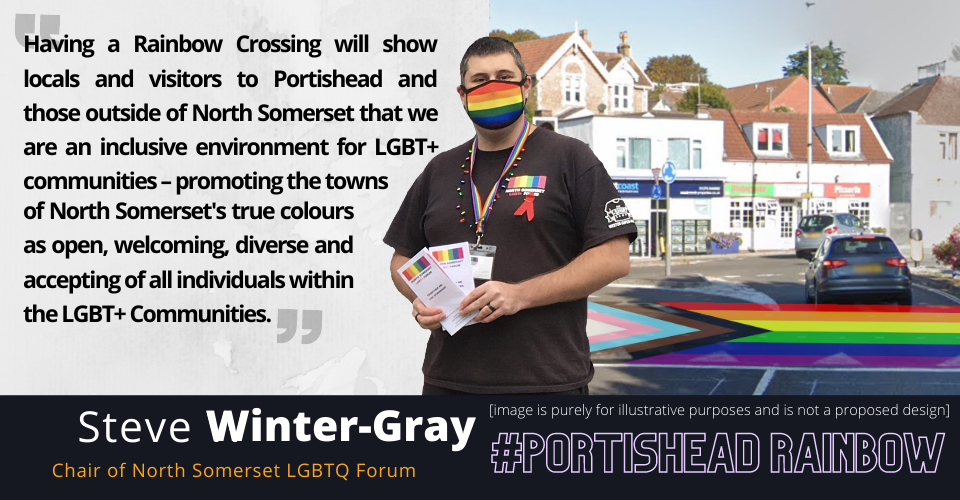 Steve Winter-Gray, Chair of North Somerset LGBTQ Forum, said: "It seems only appropriate that at the start of LGBT+ History month and with nearly all Pride and LGBT+ Events having been cancelled in 2020, talking about raising visibility of the LGBT+ Community through a Rainbow Crossing being placed in Portishead really strikes a chord in my heart alongside those hearts of the other Trustees within the North Somerset LGBT+ Forum. It would be amazing to think that if this takes off and the council gets behind this for Portishead, that we could also see  Rainbow Crossings in Clevedon, Nailsea, and  Weston-super-Mare. What an amazing way to celebrate diversity within our communities in North Somerset, while brightening up the towns roads and also improving safety on our roads for the younger and more vulnerable members of the North Somerset communities who are often at risk when crossing busy roads. Having a Rainbow Crossing will show the locals and visitors to Portishead and those outside of North Somerset that we are an inclusive environment for LGBT+ communities – promoting the towns of North Somerset's true colours as open, welcoming, diverse and accepting of all individuals within the LGBT+ Communities." 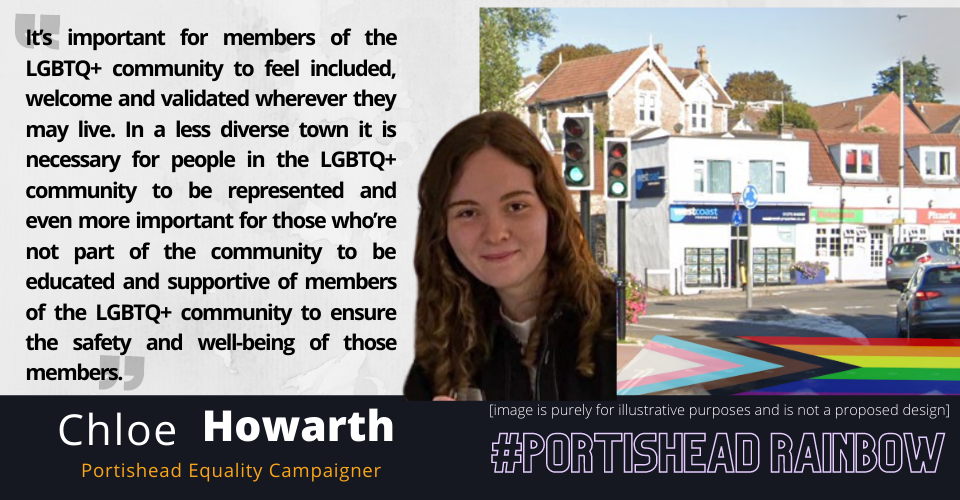 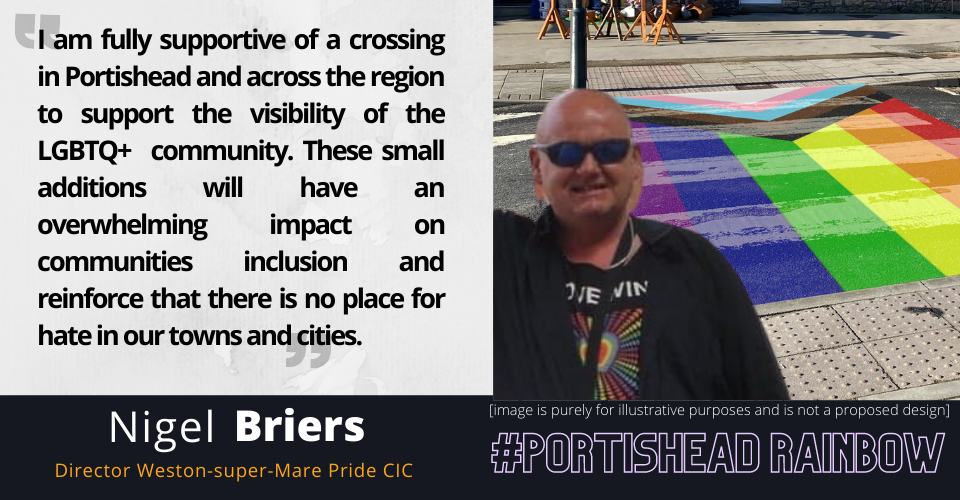 Nigel Briers, Director of Weston Super Mare Pride and manager of Proud Bar, said "I am fully supportive of a crossing in Portishead and across the region to support the visibility of the LGBTQ+ community. These small additions will have an overwhelming impact on communities inclusion and reinforce there is no place for hate in our towns and cities."

The petition has received an overwhelmingly positive response from local residents, being shared on Community Facebook Groups, as well as featuring in an article of the Bristol Post.

If you are a journalist and would like further information about this press release, contact  Huw James via email - [email protected]